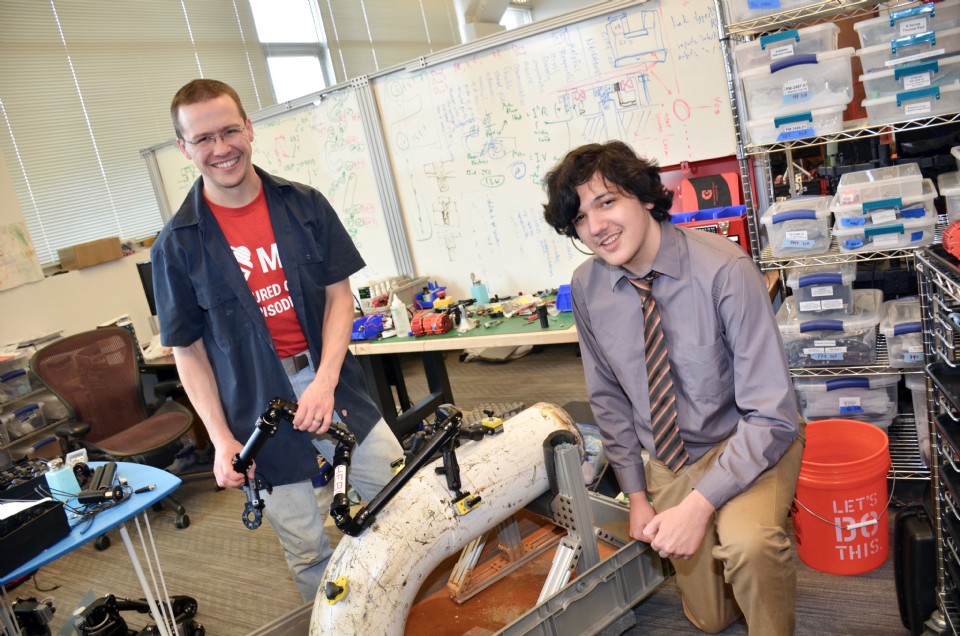 HEBI Robotics was founded in 2014 by a cross-disciplinary team from the world-renowned Robotics Institute at Carnegie Mellon University. The company is a spin-out of CMU’s Biorobotics Lab, led by Professor Howie Choset.

HEBI’s team of PhD researchers, engineers, and technicians has experience developing robotics tools for the military, sewer inspection, space flight, and the aerospace industry. Their expertise includes robotics, hardware, and software, with a core focus on motion control.

It is no surprise that HEBI would mentor students from City Charter High School, such as Ajani Mohanty. One of HEBI’s co-founders from this team, Dr. Dave Rollinson was instrumental in growing the City High Robotics efforts while he was still working on his PhD in mechanical engineering and robotics at Carnegie Mellon.

“When I was shadowing Dave,” City High student Ajani recalls, “He was working on a robot’s arm that they designed that was able to test pipes… the density of pipes while sensing it from one side of the pipe. There was a lot more to it, but it demonstrates the kind of applications it could have.”

According to Dr. Rollinson, “Our platform enables researchers and industry partners to do in days what takes months with traditional hardware. We started out basically making tools for researchers. People or companies or universities have an idea for a robot that they can’t buy. So they want to make something custom. And so we are focused on trying to help them make systems that are collaborative – things that basically work alongside people or can be worn on people, like prosthetics, exoskeletons.”

The secret to HEBI’s success is they make actuators that can control the force as well as be very precise. Dr. Rollinson explains, “What people think of as industrial robots – can be very precise, but they’re also very stiff and very dangerous. So, what we make are tools, the kind of tools that are like a person who can control how hard they’re pushing, not just exactly where they’re going. Most of what we make are basic tools for researchers trying to make the next generation of robots.  Also working on projects for oil and gas and trying to create tools were people can do things like industrial inspections much more quickly, much more safely. And we bring robotic technology to bear even if it’s not explicitly a robot that is needed.”